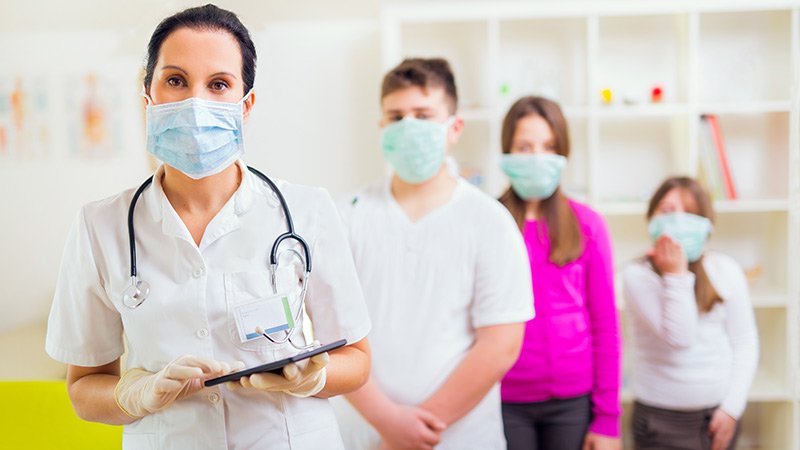 Cancer treatments including chemotherapy, biological agents, and immunotherapy appear to alter a patient’s immune response to COVID-19 in such a way as to make the infection less severe if these patients become infected, suggests a small study from Israel.

The team compared the response to SARS-CoV-2 virus in a group of patients with cancer on active treatment with those seen in healthcare workers, and found differences in the immune cell profiles that suggest a different inflammatory response to the virus in the two groups. Although the sample size was small, the difference was striking.

The study was published online today in the journal Cancers.

The hypothesis is that cancer patients are less able to mount a robust inflammatory response to COVID-19 because of treatment-related changes to their immune system, explains senior author Irit Ben – Aharon MD, PhD, head of the division of oncology at Rambam Health Care Campus in Haifa, Israel.

As such, patients with cancer under treatment may be less prone to have a “cytokine storm” reaction that is caused by an overly robust immune response to the virus, which contributes to a sizeable proportion of the morbidity and mortality seen in COVID-19-infected patients.

An expert approached for comment warned that the numbers in this study are too small to draw any conclusions, but said that the theory is “biologically plausible.”

“At the beginning of the pandemic, everyone was told that there were several high-risk populations for COVID-19, among them cancer patients because they are immunosuppressed and they are also predisposed to get other viruses, so it was assumed they would be predisposed to get COVID-19 as well,” Ben-Aharon told Medscape Medical News.

“So we needed to see if this was true because that assumption has been translated into an almost panic situation where cancer patients would rather not get treatment because they are afraid they’ll become ill from COVID-19,” she added.

“But what we saw was that the incidence of COVID-19 was not different in the sample of cancer patients we studied compared with healthcare workers — at least not in asymptomatic patients — and there was a difference in the immune cell profile between these two groups as well, ” Ben-Aharon commented.

“This difference may translate into a different inflammatory response [to COVID-19], although this needs to be studied further,” she added.

Importantly, the study was conducted between the end of March and the beginning of June, so it reflects only what was going on during that time interval in Israel, as Ben-Aharon stressed. During that time period, Israel was in total lockdown.

Serology was carried out on 164 patients with cancer (92 female, median age, 63 years) receiving active intravenous treatment and on 107 healthcare workers (88 female, median age, 41 years) at the Rambam Health Care Campus oncology center. Some 60% of the patient group had metastatic disease and the remaining 40% had locoregional cancer.

Almost three quarters of cancer patients were receiving chemotherapy, one third were receiving biological therapy, and one quarter were receiving immunotherapy. Some patients received more than one treatment modality, the authors point out.

Ben-Aharon emphasized that, as Israel was in total lockdown during the study interval, these patients with cancer and the healthcare workers traveled only between their homes and the treatment center as there was nowhere else to go.

The study results show that patients were indeed exposed to fewer people during the study interval, which suggested that they were self-isolating (P < .01). The hospital made universal facial masking as well as body temperature checking mandatory from mid-April onwards.

“During the study interval, there was no documented symptomatic case of COVID-19 among the recruited participants, nor in the general patient population of the cancer center or in the healthcare workers cohort,” the investigators note.

In contrast, anti-SARS-CoV-2 IgM and IgA were undetectable in all serum samples at all three times tested.

“Out of the six participants with positive results, only one had COVID19-related co-morbidities,” they add.

CyTOF (cytometry by time of flight) analysis, which delineates individual cells in the immune system, showed differences between the two groups.

“We had a very small sample size,” Ben-Aharon acknowledged. “But even with this minimal sample size, we saw a different pattern in the immune profile [between the two groups] and when we looked at how COVID-19 affected healthcare workers, we could see that the pattern was completely different, especially in the myeloid cells, compared with cancer patients,” she added.

Changes in the percentages of immune cells between healthcare workers and cancer patients who were SARS-CoV-2 IgG– were also “substantial” when it came to natural killer cells, B cells and dendritic cells, “further suggesting that the immune cell composition may alter the sensitivity of cancer patients to the virus when compared to healthcare workers,” researchers suggest.

Quite remarkably, no clinically symptomatic cases of COVID-19 were documented among the 8500 patients who visited the Rambam oncology center between December 2019 and May 2020.

Furthermore, not one of the 228 healthcare workers at the cancer center developed symptomatic COVID-19 infection during the same time interval.

“Cancer centers still need to take all the same precautions like wearing a mask and practice social distancing, but they should be following their routine treatment schedules because COVID-19 infection in cancer patients does not appear to be catastrophic,” Ben-Aharon emphasized.

“A cancer patient’s risk is not from COVID but from their cancer and physicians should be treating it,” she said.

Asked to comment on the study, Alvin Lee, MBBS, PhD, clinical lecturer, University College London, United Kingdom, felt that the numbers in the study were still too small to draw any definite conclusions from the data thus far.

“Researchers did detect antibodies [to the SARS-CO-V-2 virus] in the blood but we don’t know how many days post-infection people were, so it’s still quite early in the story,” he emphasized.

However, Lee also felt that it is “certainly biologically plausible” that cancer treatment could affect a patient’s immune profile.

As a member of the project management group for the UK Coronavirus Cancer Monitoring Project, Lee and colleagues recently reported the results of an analysis of 800 patients with cancer and symptomatic COVID-19 treated between March 18 and April 26 in a network of cancer centers.

About half (52%) of these patients had a mild infectious disease course.

Some 28% of the group died, but the risk of death was significantly associated with advanced patient age (odds ratio [OR], 9.42); being male (OR, 1.67), and the presence of other comorbidities such as hypertension (OR, 1.95) and cardiovascular disease (OR, 2.32).

Moreover, after adjusting for age, gender and comorbidities, “chemotherapy in the past 4 weeks had no significant effect on mortality from COVID-19 disease when compared with patients with cancer who had not received recent chemotherapy,” Lee and colleagues reported.

Lee told Medscape Medical News that this particular cohort of cancer patients likely had a better prognosis than many others, as they were expected to benefit the most from anti-cancer treatment.

“So I think this may be why we did not see increased risk of mortality apart from [other now well established] risk factors for COVID-19 death,” he said.

“But it is certainly plausible that cancer treatment could affect the immune profile of cancer patients, which would then affect outcomes for those infected with COVID-19,” he said.

Ben-Aharon, the study coauthors, and Lee have disclosed no relevant financial relationships.