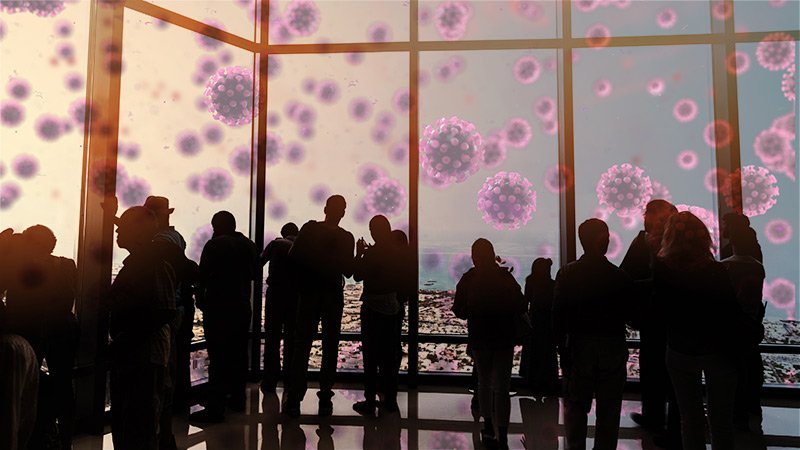 The Centers for Disease Control and Prevention (CDC) today abruptly deleted information from its website that it had updated Friday on how COVID-19 is spread.

The CDC had updated information on coronavirus spread and had acknowledged the prominence of aerosol transmission.

CDC’s new information still says that Sars-CoV-2 is commonly spread between people who are within about 6 feet of each other, which has been the agency’s stance for months now.

However, the deleted update had added it is spread “through respiratory droplets or small particles, such as those in aerosols, produced when an infected person coughs, sneezes, sings, talks, or breathes. These particles can be inhaled into the nose, mouth, airways, and lungs and cause infection. This is thought to be the main way the virus spreads.”

Responding to Medscape Medical News questions about the update, Jasmine Reed, spokesperson for the CDC, told Medscape Medical News, “A draft version of proposed changes to these recommendations was posted in error to the agency’s official website. CDC is currently updating its recommendations regarding airborne transmission of SARS-CoV-2 (the virus that causes COVID-19). Once this process has been completed, the update language will be posted.”

Previously, the CDC said the virus is spread mainly among people who are within about 6 feet of each another through respiratory droplets propelled when an infected person coughs, sneezes, or talks.

Previous guidance also said, “These droplets can land in the mouths or noses of people who are nearby or possibly be inhaled into the lungs.”

The now deleted update said, “There is growing evidence that droplets and airborne particles can remain suspended in the air and be breathed in by others, and travel distances beyond 6 feet (for example, during choir practice, in restaurants, or in fitness classes).”

On July 6, Clinical Infectious Diseases published the paper “It Is Time to Address Airborne Transmission of Coronavirus Disease 2019,” which was supported by 239 scientists.

The authors write, “There is significant potential for inhalation exposure to viruses in microscopic respiratory droplets (microdroplets) at short to medium distances (up to several meters, or room scale).

The World Health Organization (WHO) acknowledged after this research was published that airborne transmission of the virus may play a role in infection, especially in poorly ventilated rooms and buildings, but have yet to declare aerosols as a definitive contributor.

WHO has long stated that coronavirus is spread mainly by droplets that, once expelled by coughs and sneezes of infected people, fall quickly to the floor.

The CDC update was made Friday without announcement.

“This has been one of the problems all along,” said Leana Wen, MD, an emergency physician and public health professor at George Washington University, Washington, DC. “The guidance from CDC changes on their website, but there’s no press conference, there’s no explanation of why they’re changing this now.”

Again Monday, there was no announcement that information had changed.

The CDC continues to recommend staying 6 feet from others, washing hands, wearing a mask and routinely disinfecting frequently touched surfaces.

The update had added, “Use air purifiers to help reduce airborne germs in indoor spaces.”

Marcia Frellick is a freelance journalist based in Chicago. She has previously written for the Chicago Tribune, Science News and Nurse.com and was an editor at the Chicago Sun-Times, the Cincinnati Enquirer, and the St. Cloud (Minnesota) Times. Follow her on Twitter at @mfrellick