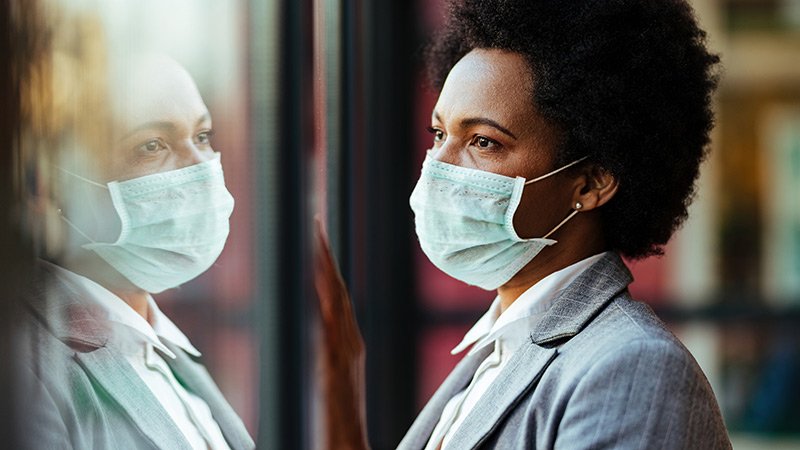 During normal times, the UK-based charity No Panic offers itself as an easily accessible service to those with anxiety disorders and phobias. Visitors to the website who can receive immediate, remote support from trained volunteers. But this spring was anything but normal, as the reality of COVID-19’s worldwide spread became terrifyingly clear.

COVID-19 cases peaked in the United Kingdom in early April. Nationwide lockdown efforts contributed to a gradual but ultimately substantial decline in cases, yet, despite the favorable trend lines, No Panic has remained busier than ever.

Beyond the physical symptoms associated with COVID-19, the psychological outcomes are vast and, it seems, prolonged. Researchers have now formalized a definition of the long-term mental maladies associated with the pandemic, collectively deeming them “coronaphobia.”

The term is a catch-all phrase for the fear and the emotional and social strain experienced by the general public in response to COVID-19. Obsessive behaviors, distress, avoidance reaction, panic, anxiety, hoarding, paranoia, and depression are some of the responses associated with coronaphobia. On the surface, these appear to be normal, somewhat fitting reactions to this surreal and frightening moment in time. However, for those experiencing coronaphobia, they are distinctly maladaptive and harmful.

“We had a serious rise in the use of our services, notably the helpline and email enquiries,” explained Sarah Floyd, No Panic’s volunteer advisor and social media coordinator. “It has been up and down all along, but more of an up since lockdown is easing.”

The group’s experience offers yet more evidence that the anxieties and fears caused by this global pandemic don’t flatten alongside the curve but instead linger as chronic problems requiring ongoing care.

“Every week in my clinic, I’m seeing people who are experiencing more anxiety and hopelessness and having an emotional response that is perhaps out of proportion to what one would expect, which is directly related to what is going on in the world right now with coronavirus,” said Gregory Scott Brown, MD, founder and director of the Center for Green Psychiatry in West Lake Hills, Texas. “Simply put, I think what we are looking at is adjustment disorder. That is probably how the DSM would define it.”

Adjustment disorder is one of the most frequently diagnosed mental health conditions, although it is also relatively understudied. It is really a set of disorders that follow in the wake of a significant stressor, which can vary from serious illness or the death of a loved one to relocating or experiencing work problems. The resulting dysfunction and distress that the person experiences are considered out of proportion in duration or scale with what would normally be expected. Diagnosing an adjustment disorder is made difficult by the lack of a valid and reliable screening measure.

Recent literature suggests that coronaphobia may be likely to occur in those who feel vulnerable to disease, are predisposed to anxiety, or are intolerant of uncertainty. Preexisting mental health conditions can also be exacerbated by periods of quarantine, self-isolation, and lockdown, which can lead to panic attacks, chronophobia (fear of passing time), and suicidality.

Although imperfect comparisons, findings from earlier 21st century disease outbreaks, such as severe acute respiratory syndrome and the Ebola virus, signal that containment efforts themselves play a role in deteriorating mental health. A recent rapid review found that in studies comparing persons who had previously undergone quarantines and those who had not, the former were significantly more likely to experience acute stress disorder, posttraumatic stress symptoms, and depression. Quarantine was found to result in long-term behavioral changes, such as avoiding crowds, among the general public and healthcare practitioners.

That tremendous psychological morbidity should accompany a global pandemic of this scale is not surprising, according to Amit Anand, MD, vice-chair for research for the Center for Behavioral Health and director of the Mood and Emotional Disorders Across the Life Span program at the Cleveland Clinic.

“The technical definition of anxiety is an impending sense of doom, and I think all of us are living with that,” Anand said. “The basic question then becomes, what is normal and when does it become abnormal?”

He added that most classifications of psychiatric disorders are set during periods of relative stability, which the current moment is most certainly not.

This is such an unusual situation, so I think it will depend on case-by-case basis…

“This is such an unusual situation, so I think it will depend on case-by-case basis, keeping the whole context in mind as whether the patient is thinking or behaving with an abnormal amount of anxiety,” Anand said.

Investigators are currently trying to give clinicians the tools to better make that determination. In the first scientific study of this clinical condition, Sherman Lee, MD, reported that five symptoms — dizziness, sleep disturbances, tonic immobility, appetite loss, and nausea/abdominal distress — were strong factors for distinguishing coronaphobia from otherwise normal concerns about COVID-19 that did not result in functional impairment. Lee and colleagues have since published further evidence that coronaphobia “is a unique predictor of psychological distress during the COVID-19 crisis.” They are working on validating a self-reported mental health screener for this condition.

Having the tools to identify patients struggling with coronaphobia may go some ways toward addressing another area of declining health. At the outset of the COVID-19 pandemic, there was a question as to whether doctors would be beset by a surge of the “worried well” ― persons mistakenly believing themselves to be infected. Now months into the pandemic, the converse phenomenon — a fear of contracting COVID-19 that is driving patients away from practitioners — appears to be the more valid concern.

In early spring, the pandemic’s first surge was accompanied by reports of approximately 40% and 60% drops in visits to emergency departments and ambulatory centers, respectively. Stories of acute stroke patients avoiding treatment began to appear in the press. Major US cities saw noteworthy declines in 911 calls, indicating a hesitancy to be taken to a hospital. That COVID-19 has been accompanied by mass unemployment and subsequent loss of insurance complicates the notion that fear alone is keeping people from treatment. In other countries, it has been explicitly linked. Investigators in Singapore noted that coronaphobia played a role in reducing willingness to attend in-person visits among adolescents with eating disorders. Similarly, case reports in Israel suggest that coronaphobia has contributed to delays in diagnoses of common pediatric diseases.

Even after this challenging moment in history draws to a close, many people may face substantial stress in returning to the normal activities of life.

There is also a concern, colloquially termed “reentry anxiety,” that mental health problems caused by the pandemic, the accompanying lockdown, self-isolation, and quarantine practices will prove alarmingly durable. Even after this challenging moment in history draws to a close, many people may face substantial stress in returning to the normal activities of life — social, professional, familial — once taken for granted.

“We are in the beginning phase of that now,” said Anand. “Lots of people are decompensating, getting depressed, and needing treatment. I think the longer it goes on for, the more difficult it will be.”

In the United States, that day may seem far away. Nonetheless, it is important to begin laying the therapeutic groundwork now, according to Brown.

“I am recommending unconventional therapies like meet-up groups, online forums,” he said. “Everything has shifted online, and so there are a lot of support groups that patients can participate to learn coping skills and really hear what other people are going through.”

Before reaching that stage, Brown recommends that clinicians first simply discuss such anxieties with their patients in order to normalize them.

“Realize that everyone essentially is going through some degree of this right now. The coronavirus pandemic is literally impacting every person on the face of the planet. Sometimes just pointing that out to people can really help,” he said.

John Watson is a freelance writer in Philadelphia, Pennsylvania.