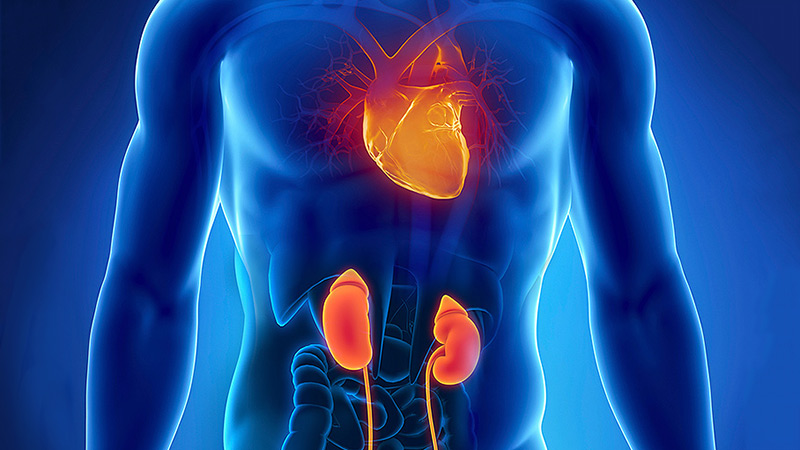 Those messages include findings that were “consistent” with the results of the earlier DAPA-HF trial, which tested the same sodium-glucose transporter 2 (SGLT2) inhibitor in patients selected for having heart failure with reduced ejection fraction (HFrEF). In addition, a specific action of dapagliflozin (Farxiga) on the patients in DAPA-CKD, which enrolled patients based on markers of chronic kidney disease (CKD), was prevention of first and recurrent heart failure hospitalizations, John J.V. McMurray, MD, said at the virtual annual scientific meeting of the Heart Failure Society of America, further highlighting the role that dapagliflozin has in reducing both heart failure and renal events.

What DAPA-CKD Means for Heart Failure

The main findings from the DAPA-CKD trial, published in September in the New England Journal of Medicine, included as a secondary outcome the combined rate of death from cardiovascular causes or hospitalization for heart failure (HHF). Treatment with dapagliflozin linked with a significant 29% relative reduction in this endpoint, compared with placebo-treated patients. At the HFSA meeting, Dr. McMurray reported for the first time the specific HHF numbers, a prespecified secondary endpoint for the study.

Patients on dapagliflozin had 37 total HHF events (1.7%), including both first-time and subsequent hospitalizations, while patients in the placebo arm had a total of 71 HHF events (3.3%) during the study’s median 2.4 years of follow-up, an absolute reduction of 1.6% that translated into a relative risk reduction of 49%.

The HHF findings from DAPA-CKD importantly showed that SGLT2 inhibition in patients with signs of renal dysfunction “will not only slow progression of kidney disease but will also reduce the risk of developing heart failure, crucially in patients with or without type 2 diabetes,” explained Dr. McMurray in an interview. “Cardiologists often consult in the kidney wards and advise on management of patients with chronic kidney disease, even those without heart failure.”

The DAPA-CKD findings carry another important message for heart failure management regarding the minimum level of renal function a patient can have and still safely receive dapagliflozin or possibly another agent from the same SGLT2 inhibitor class. In DAPA-CKD, patients safely received dapagliflozin with an estimated glomerular filtration rate (eGFR) as low as 25 mL/min per 1.73 m2; 14% of enrolled patients had an eGFR of 25-29 mL/min per 1.73 m2.

“Typically, about 40%-50% of patients with heart failure have chronic kidney disease,” which makes this safety finding important to clinicians who care for heart failure patients, but it’s also important for any patient who might be a candidate for dapagliflozin or another drug from its class. “We had no strong evidence before this trial that SGLT2 inhibition could reduce hard renal endpoints,” specifically need for chronic dialysis, renal transplant, or renal death, “in patients with or without diabetes,” Dr. McMurray said.

A further consequence of the DAPA-CKD findings is that when, as expected, regulatory bodies give dapagliflozin an indication for treating the types of CKD patients enrolled in the trial, it will functionally expand this treatment to an even larger swath of heart failure patients who currently don’t qualify for this treatment, specifically patients with CKD who also have heart failure with preserved ejection fraction (HFpEF). On Oct. 2, 2020, the Food and Drug Administration fast-tracked dapagliflozin for the CKD indication by granting it Breakthrough Therapy Designation based on the DAPA-CKD results.

Results first reported in 2019 from the DAPA-HF trial led to dapagliflozin receiving a labeled indication for treating HFrEF, the types of heart failure patients enrolled in the trial. Direct evidence on the efficacy of SGLT2 inhibitors for patients with HFpEF will not be available until results from a few trials now in progress become available during the next 12 months.

In a separate session at the HFSA virtual meeting, Dr. McMurray and several collaborators on the DAPA-HF trial presented results from some new analyses. Dr. McMurray looked at the impact of dapagliflozin treatment on the primary endpoint when patients were stratified by the diuretic dosage they received at study entry. The results showed that “the benefits from dapagliflozin were irrespective of the use of background diuretic therapy or the diuretic dose,” he reported. Study findings also showed that roughly three-quarters of patients in the study had no change in their diuretic dosage during the course of the trial, that the fraction of patients who had an increase in their dosage was about the same as those whose diuretic dosage decreased, and that this pattern was similar in both the patients on dapagliflozin and in those randomized to placebo.

Another set of new analyses from DAPA-HF looked at the impact on dapagliflozin efficacy of background medical and device therapies for heart failure, as well as background diabetes therapies. The findings showed no signal of an interaction with background therapies. “The effects of dapagliflozin are incremental and complimentary to conventional therapies for HFrEF,” concluded Lars Kober, MD, a professor and heart failure physician at Copenhagen University Hospital.

DAPA-CKD was funded by AstraZeneca, the company that markets dapagliflozin (Farxiga). Dr. McMurray’s employer, Glasgow University, has received payments from AstraZeneca and several other companies to compensate for his time overseeing various clinical trials. Dr. Kober has received honoraria for speaking on behalf of several companies including AstraZeneca.