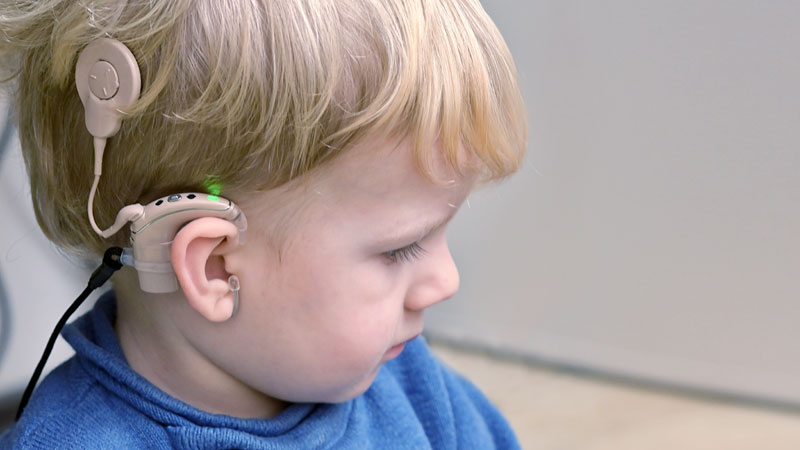 Starting early intervention (EI) enrollment before age 6 months in children who are deaf or hard of hearing may have a lasting influence on ensuring kindergarten readiness, Jareen Meinzen-Derr, PhD, MPH of Cincinnati Children’s Hospital Medical Center and colleagues reported in Pediatrics.

The researchers created a comprehensive, longitudinal, population-based database, which linked hearing screening and diagnostic data to that of early intervention data and educational records for 1,746 infants identified with permanent hearing loss who were born between Jan. 1, 2008 and Dec. 31, 2014 The database was established in partnership with the Ohio Departments of Health, Developmental Disabilities and Education, and with the support of the Centers for Disease Control and Prevention and the National Center on Birth Defects and Developmental Disabilities.

Of those, 784 children ranging from preschool to fourth grade were evaluated based on education data available for the 2017 and 2018 school year that had been linked by way of an identifier that flagged students enrolled in EI.

The Importance of EI Prior to 6 Months

A total of 109 children (28%) receiving services as part of Ohio’s early intervention programs demonstrated kindergarten readiness on their overall KRA scores. The scores revealed that children receiving EI early (34%, n = 75) were more likely to be ready for kindergarten than were those who entered later (21%, n = 34; P = .005). They also were more likely to have on track language and literacy scores (60% vs. 42%, respectively; P = .0006).

The researchers cautioned that children transitioned from EI to academic settings will face challenges that may go underrecognized because a school’s focus often is largely on social and academic performance. Thus, working with linked data systems can provide the data to track outcomes that might otherwise be missed, the researchers noted.

Furthermore, they cautioned that even though kindergarten readiness offers some glimpse into future academic success, these measures alone may not be sufficient predictors for children who are deaf or hard of hearing. Risk for communication, social, and academic delays persist throughout school so it is important to employ alternative methods of reading instruction in order to “achieve more complex skills (e.g., complex syntax and advanced vocabulary) necessary for reading proficiency,” the researchers said.

Collecting data from public health and education systems posed limitations for the study. In addition, the absence of kindergarten language assessments prevented Dr. Meinzen-Derr and colleagues from better elucidating reasons for kindergarten readiness. Also beyond the scope of the study was the ability to evaluate the effect service types may have had on outcomes.

The next step in the research process is to evaluate the link between outcomes and specific EI parameters, they said. “Our study demonstrates that an integrated data system can address relevant and important topics regarding early academic outcomes (kindergarten readiness and reading levels) among children who received EI. The current findings provide a new context by evaluating later outcomes among children who are deaf or hard of hearing,” they added, noting that more research is needed to grasp how various EI services impact outcomes since enrollment age is a marker of EI exposure.

In a separate interview, Amy Hardy M.S. CCC-SLP, speech language pathologist and clinical professor at Idaho State University, emphasized the importance of early intervention, citing reports from the National Center for Hearing Assessment and Management, which credits detection and treatment of hearing loss at birth per child to saving $400,000 in special education costs by the time they graduate from high school (https://www.ncsl.org/research/health/newborn-hearing-screening-state-laws.aspx).

Earliest possible hearing detection is and should be a standard of care for infants and children, and the importance of follow up appointments also cannot be understated,” Hardy said. Perhaps the biggest challenge for professionals involved with early learning is that many children are delayed in receiving follow up appointments for hearing detection, she added. When families fail to receive a follow-up notice or opt not attend the follow-up appointment, this leaves infants that may be deaf or hard of hearing unidentified, she explained, noting that in some states, lack of consistent and stable state funding needed for effective follow-up with these children and families is a factor.

Hardy urged that anyone who knows an expectant family can tout the importance of early screenings. Even daycare workers have a responsibility to play a role in early hearing detection, she noted.

Although speech language pathologists routinely advocate for early intervention, “it is never too late to work on skills that will assist children in their everyday lives,” she advised.

The authors had no relevant financial disclosures. The study was funded in part by the Disability Research and Dissemination Center via cooperative agreements with the Centers for Disease Control and Prevention.