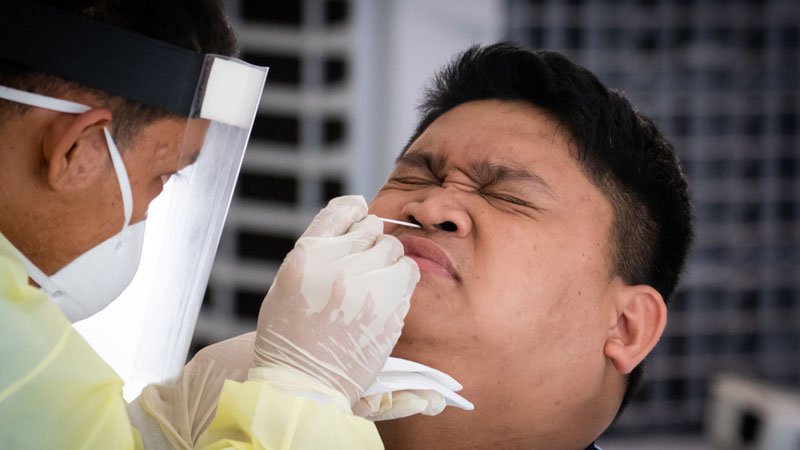 “This case of iatrogenic CSF leak from nasal swab testing for COVID-19 illustrates that prior surgical intervention, or pathology that distorts normal nasal anatomy, may increase the risk of adverse events associated with nasal testing for respiratory pathogens, including COVID-19,” write Christopher Blake Sullivan, MD, from the Department of Otolaryngology–Head and Neck Surgery at the University of Iowa Hospitals and Clinics in Iowa City, and colleagues.

“One should consider alternative methods to nasal screening in patients with known prior skull base defects, history of sinus or skull base surgery, or predisposing conditions to skull base erosion,” the authors continue.

The findings were published online today in JAMA Otolaryngology–Head and Neck Surgery.

Encephaloceles occur when neural tissue herniates through defects in the skull. They can contain meninges or both brain matter and meninges, or they may connect with a ventricle (encephalomeningocystocele). Twenty percent of encephaloceles are found in the cranium, and 15% of those occur in the nose.

Of the five methods the US Centers for Disease Control and Prevention recommends for SARS-CoV-2 testing, three involve nasal swabs, including nasopharyngeal, anterior nasal, and midturbinate swab testing.

The authors believe this is the first reported case of a CSF leak after nasal swab testing for COVID-19.

History of “Paranasal Sinus Disease but Not an Encephalocele”

The patient was a woman in her 40s who developed clear rhinorrhea from the right side of her nose, metallic taste, headache, neck stiffness, and photophobia. She had recently undergone nasal COVID-19 testing in anticipation of an elective hernia repair and shortly thereafter developed right-sided rhinorrhea, headache, and vomiting.

The CSF can be salty or have a metallic taste, senior author Jarrett E. Walsh, MD, PhD, from the Department of Otolaryngology–Head and Neck Surgery at the University of Iowa Hospitals and Clinics in Iowa City, told Medscape Medical News.

“Associated with the drainage of fluid, [patients] can have headaches, and in the worst case, CSF leaks can lead to meningitis, because of bacteria from the dirty nose [getting into] the clean space around the brain,” he added.

During a physical exam, clear rhinorrhea on the right side was identified. In addition, a mass was seen in the right anterior middle meatus during flexible nasopharyngoscopy, but no source for the fluid was identified. Nasal drainage testing was positive for β2-transferrin.

Further examination with CT and MRI revealed “a 1.8-cm encephalocele extending through the right ethmoid fovea into the middle meatus and a right sphenoid wing pseudomeningocele,” the authors explain.

When the authors compared the current images to CT findings from 2017, they found that the encephalocele had been present from that time or before. The CT diagnosis from 2017 “was paranasal sinus disease but not an encephalocele,” they continue.

The patient was admitted to the hospital and underwent endoscopic surgical repair. All except the tiniest CSF leaks of this type require intervention, Walsh said, adding, “Patients who fail to have these leaks repaired are likely to have ongoing leakage.”

During the repair, clinicians infused intrathecal fluorescein through a lumbar drain and identified an encephalocele in the right anterior ethmoid cavity. After the encephalocele was reduced, “a skull base defect in the fovea ethmoidalis was repaired with a combination of acellular human dermal matrix and a poly (D,L-lactic) acid,” the authors write.

Postoperatively, the patient was admitted to the hospital for neurologic monitoring and management of the lumbar drain.

Very Rare Occurrence Might Have Been Avoided With Proper Technique

Prior reports of iatrogenic CSF leaks from intranasal procedures have identified surgical trauma at the cribriform plate as the cause in 8% to 58% of cases.

“Idiopathic intracranial hypertension is a risk factor for meningocele formation, and this patient had an undiagnosed skull base defect at the fovea ethmoidalis that was present on imaging dating back to 2017,” the authors write.

“We therefore theorize that the swab itself did not result in a violation of the bony skull base, but rather the invasive test caused trauma to the patient’s preexisting encephalocele.”

Walsh said that proper technique during the nasal swabbing might have avoided this complication.

“This is a unique situation in that, undoubtedly, this patient had something that predisposed her to have a CSF leak that was present for at least 2 years based on a review of some older information, and most likely…the swab injured this CSF-filled encephalocele at the time, because the swab was up high instead of down low,” Walsh told Medscape Medical News.

“The way to avoid issues like this would be to follow the CDC guidelines for swabbing…. If you’re going for the nasopharynx, the swab is parallel to and run along the floor of the nose, which [will] keep you away from the skull base,” he explained.

“Clinicians should stick to the appropriate testing patterns and be aware of certain populations who might be a higher risk for inadvertent injury,” Walsh said.

Testers should inquire about previous sinus surgery and whether they’ve had skull base surgery. Prior surgery at the skull base could result in a larger exposed area with the potential for thinner areas that could develop a CSF leak if inadvertently swabbed, he continued.

“Thankfully, this is a very rare thing, and the vast majority of people shouldn’t be fearful of getting a test if there’s concern for infection. If they’ve had prior surgery or they’re concerned, consider using a different testing method,” Walsh concluded.

Troy Brown is an award-winning Medscape contributor with a special interest in infectious diseases, women’s health, and pediatrics.