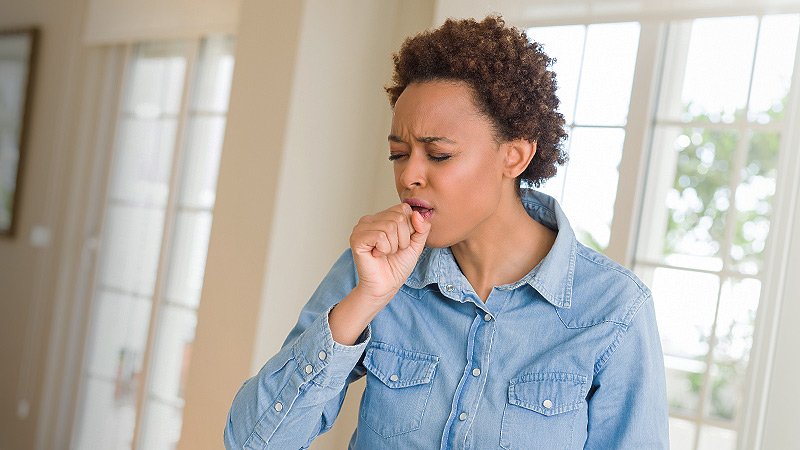 No treatment currently exists for the condition, which affects nearly 10% of the general population around the world. If approved, the P2X3 receptor agonist would be the first new drug for cough in more than 50 years, McGarvey told Medscape Medical News.

End Points Met in Both Trials

The reduction in cough over 24 hours was statistically significant with the twice-a-day 45 mg dose in the parallel, double-blind 12-week COUGH-1 and 24-week COUGH-2 trials, and the primary and secondary end points at that dose were met, McGarvey reported during his virtual presentation at the European Respiratory Society International Congress 2020.

The 2044 study participants — 730 in COUGH-1 and 1314 in COUGH-2 — were adults recruited from 150 centers in 17 countries and randomized to one of three groups: gefapixant 45 mg or 15 mg twice a day or placebo. Average age of the participants was 58 years, 75% were women, 80% were White, and average cough duration was 11 years. Coughs were measured with an ambulatory cough monitor that had a cough recording device.

At baseline screening, cough severity for all participants was at least 40 mm on a 100 mm visual analog scale.

At the 15 mg dose, the reduction in cough did not reach statistical significance.

Although the placebo response was expected, the size of the response (53% to 57% over the two trials) was “greater than anticipated,” McGarvey said.

The primary adverse event — taste disruption — was reported by 58% of participants in COUGH-1 and 69% in COUGH-2. Reports of a metallic or chalky taste were more common in the 45 mg group than in the 15 mg group.

However, “many of these patients are so terribly troubled by their chronic cough that they appear happy to continue with the medication despite this taste disturbance,” McGarvey said.

The bad-taste reports were expected because they had surfaced in earlier phases of the trials, he explained. And taste disturbances were also reported by 3% to 8% of participants in the placebo groups.

“This is exciting,” said Panagis Galiatsatos, MD, MHS, a pulmonary and critical care specialist at Johns Hopkins Medicine in Baltimore, noting that gefapixant might offer an option for patients with chronic cough and no diagnosis.

However, he worries that if the drug is approved, physicians might leap right to that option, rather than taking the time to analyze a patient’s history and make a diagnosis. It takes time to rule out causes, such as reflux or postnasal drip, he noted.

“You still need a good, thorough investigation of why the cough is there,” he told Medscape Medical News. “Say you come to this medication sooner rather than later, you may miss that it was acid reflux all this time. Acid reflux that goes untreated can put you in danger of esophageal cancer in the extreme.”

The high rate of placebo response illustrates the complexities of understanding the causes of coughs. Still, gefapixant holds promise as a treatment when all options have been exhausted, Galiatsatos said.

The research was funded by Merck. McGarvey receives grants and personal fees and serves on the advisory board for Merck. Galiatsatos has disclosed no relevant financial relationships.