But for those who survive a bout with the disease and suffer long-term symptoms, there may be new hope for recovery.

That’s according to research presented at the European Respiratory Society International Congress 2020 this week.

Researchers reported that people with COVID-19 can experience long-term lung and heart damage, but for many of these patients, this condition tends to improve over time.

The sooner patients start pulmonary rehabilitation programs after coming off ventilators, the better and faster their recovery, the researchers said.

Healthline connected with the researchers behind these studies and asked other heart and lung experts for their take on the research.

Researchers in the COVID-19 “hot spot” of the Tyrolean region of Austria studied 150 people with the novel coronavirus who were hospitalized at the University Clinic of Internal Medicine in Innsbruck, the St. Vinzenz Hospital in Zams, and the cardiopulmonary rehabilitation centre in Münster.

“We performed follow-up visits in patients that had recovered from moderate-to-severe COVID-19 infection needing in-hospital treatment,” said Ivan Tancevski, an associate professor and one of the members of the team that carried out the study.

As a part of their study, the researchers performed follow-up visits at 6 and 12 weeks after discharge from the hospital.

They conducted computed tomography (CT) scans of the chest, echocardiography, lung function testing, clinical examinations, and laboratory analyses on all the participants.

About 88 percent of the people studied showed structural lung abnormalities on the CT scans 6 weeks after discharge, but at 12 weeks that had reduced to 56 percent.

“Patients needing in-hospital treatment because of moderate-to-severe COVID-19 will show persisting symptoms weeks after discharge, which mainly include shortness of breath on exertion and fatigue,” Tancevski told Healthline.

He said the severity of lung damage improved by 50 percent, regardless of whether a person had been subjected to mechanical ventilation or not.

At both 6- and 12-week visits, he said, the study participants mainly had diastolic dysfunction of the heart.

“We currently don’t know the meaning of this finding,” Tancevski said. “What we can tell is that natriuretic peptide (NT-proBNP), a sensitive marker of heart damage, was found increased at the first visit, but markedly decreased over time until visit 2. Thus, we conclude that also the heart appears to recover well over time.”

Overall, Tancevski said, both the lung and heart showed abnormalities after severe COVID-19.

“However, we see a strong tendency to improve over time,” he said.

A 24-week follow-up is scheduled for all the study’s participants.

“Our data indicate that both symptoms, as well as radiologic findings, will ameliorate further with time,” he said. “We hope that patients will fully recover until week 24 after discharge. However, we will be able to really tell at that time-point only.”

Another study, also presented at the European Respiratory Society International Congress, but conducted in France, found that the sooner people with COVID-19 started a pulmonary rehabilitation program after coming off ventilators, the better and faster their recovery.

“These patients suffer from severe muscle loss due to inactivity, balance and walking limitations, and loss in respiratory volumes and capacities due to COVID-19, but also to intubation and artificial ventilation,” Al Chikhanie told Healthline.

“Patients can have a natural recovery process, but pulmonary rehabilitation is recommended for better and faster recovery,” she added.

Dr. Matthew Tomey, a cardiologist and assistant professor of medicine at the Icahn School of Medicine at Mount Sinai in New York, said the results of these studies are consistent with what he’s seeing in his practice.

He noted that fatigue and shortness of breath are the two most common symptoms that his COVID-19 patients have.

“Both are small studies, so I think we should take them with a grain of salt,” Tomey told Healthline. “But I think that they are consistent with an increasing drum beat of data that suggests that people aren’t necessarily 100 percent back to normal immediately after their acute illness.”

Tomey believes the findings are “an important piece of the puzzle as we’re putting together the reasons why people have lingering shortness of breath or fatigue after their acute illness.”

Dr. Alexandra Kadl, a pulmonary and critical care physician at the University of Virginia Medical Center, said she was surprised by the left ventricular dysfunction found among participants in the study.

“Overall, I think those two abstracts emphasize that continued follow-up and rehabilitation is key, and we should all work on systematic capture of all COVID patients to ensure that patients needs are met and recovery is improved,” she told Healthline.

Kadl noted that follow-up care in the United States may not be as consistent as it is in Austria, where healthcare is universal and publicly funded.

She said follow-up care and rehabilitation are easier to achieve in a system such as Austria’s.

“I would think that especially patients with long and complicated hospital stays are almost definitely followed in the healthcare system in Austria, whereas in the U.S., some patients are lost in follow-up as they have no insurance and there is worry about costs for even insured patients for us (this has been noted also by other colleagues around the country),” Kadl said.

Chintan Ramani, MBBS, a senior pulmonary and critical care fellow at the University of Virginia Medical Center, worked with Kadl on a paper published in July that focused on the recovery of people discharged from ICUs.

They followed up with 42 COVID-19 patients 6 weeks after their discharge, obtaining pulmonary function tests and laboratory exams.

“Despite most of our patients requiring longer duration of mechanical ventilation, they have recovered fairly well. And review of the study you pointed out has reinforced some of our findings,” Ramani told Healthline.

“I would also say that our pulmonary function/lung function data is somewhat better than the study you referred here,” he added. “We are eagerly waiting to see more data coming from different places.”

“From our limited experience, our takeaway is, despite their overall sickness chances of recovery are really good,” Ramini said. “We still need to explore long-term consequences from the disease, but so far early findings are promising.”

The study out of France underscores the importance of pulmonary rehab in the recovery from COVID-19.

“This statement is also true for all the ICU patients requiring prolonged mechanical ventilation,” Ramani said.

Dr. Nicole Roeder, a pulmonary and critical care physician for M Health Fairview in Minnesota, said that while she wasn’t surprised by the findings, she was encouraged to hear that most of these study participants are improving after 12 weeks.

“Traditionally, if follow-up lung imaging (X-ray or CT scan) were to be performed after a pneumonia (viral or otherwise) we would expect it to have normalized by approximately 6 weeks,” she said. “It seems in COVID-19 patients, the clinical symptoms and radiographic findings are just taking longer to resolve.”

Similarly to other viral illnesses, Roeder explained, the viral infection itself is often not the issue — it’s the host’s robust immune or inflammatory response to it. She said this may take time to resolve, long after an individual is contagious or shedding virus.

Dr. Erin Michos, a cardiologist at the Johns Hopkins School of Medicine in Maryland, found the new research concerning.

“Sometimes there’s a misconception, like people who get the flu and then recover, and then they think they’re fine,” she told Healthline. “I think COVID-19 patients need to understand that there can be long-term symptoms and disability. I think this is concerning rather than encouraging.”

She noted that 65 percent of people in the study still had symptoms of lung dysfunction after 6 weeks.

Both Tomey and Michos pointed to a of 100 people in Germany who had recently recovered from COVID-19, which reported that MRIs revealed cardiac involvement in 78 percent and ongoing myocardial inflammation in 60 percent.

“Does this mean these individuals… are at risk for arrhythmia or heart dysfunction long term?” she said. “We‘ve only been dealing with this virus 6 months here in the U.S., really cases started appearing in March, so we don’t even have a year’s experience.”

“We really need to follow these individuals long term and be on the lookout for cardiac complications,” she said.

Several experts said these studies should provide some hope to people currently recovering from lung or heart damage due to COVID-19.

Roeder said that any person with persistent shortness of breath more than 12 weeks after a diagnosis of COVID-19 should undergo a cardiopulmonary evaluation.

“Patients who were critically ill in the intensive care unit (ICU) requiring the support of a ventilator may have other reasons for persistent symptoms,” she said. “Some patients can develop lung fibrosis (scarring of the lungs), complications due to the endotracheal (breathing) tube such as damage to the trachea or vocal cords, and these other conditions should be considered so they are not missed.”

The research suggests that rehabilitation is an integral part of recovery after you’ve been hospitalized with COVID-19.

“But this is not unique to COVID-19, at least in the ICU patients,” Roeder explained. “Early mobility (physical therapy) has long been suggested to improve physical recoveries. When safe to do so, we get people on ventilators up in a chair, and sometimes walking.”

“After only a day or two in bed, the loss of muscle mass is significant, and regaining that loss takes time,” Roeder added.

Michos stressed the importance of following safety guidelines — such as physical distancing, wearing masks, and handwashing — that prevent us from getting sick in the first place.

“Patients sometimes think ‘Well, I’ll either be in the ICU or I’ll only have mild symptoms’ and nothing in between. People need to understand that even if they recover from COVID, they could have long-term potential disability or reduced function, not being able to exercise or have the same capacity they did before the illness,” Michos said.

She added that people who were athletic before their diagnosis are still struggling to get back to where they once were.

Tomey has seen gradual improvement with some of his patients suffering from long-term symptoms.

“I have one young man who was a regular runner for exercise, who is getting better now but who would find that walking a couple of blocks got him winded and he had to stop,” Tomey said. “This is understandably a very foreign sensation for somebody who considered themselves to be quite fit. This is 20-somethings and 30-somethings.”

Tomey is hopeful that the vast majority of people will enjoy “functional recovery.”

“Whether there would be residual signs evident on MRIs in years to come remains to be seen,” he noted. 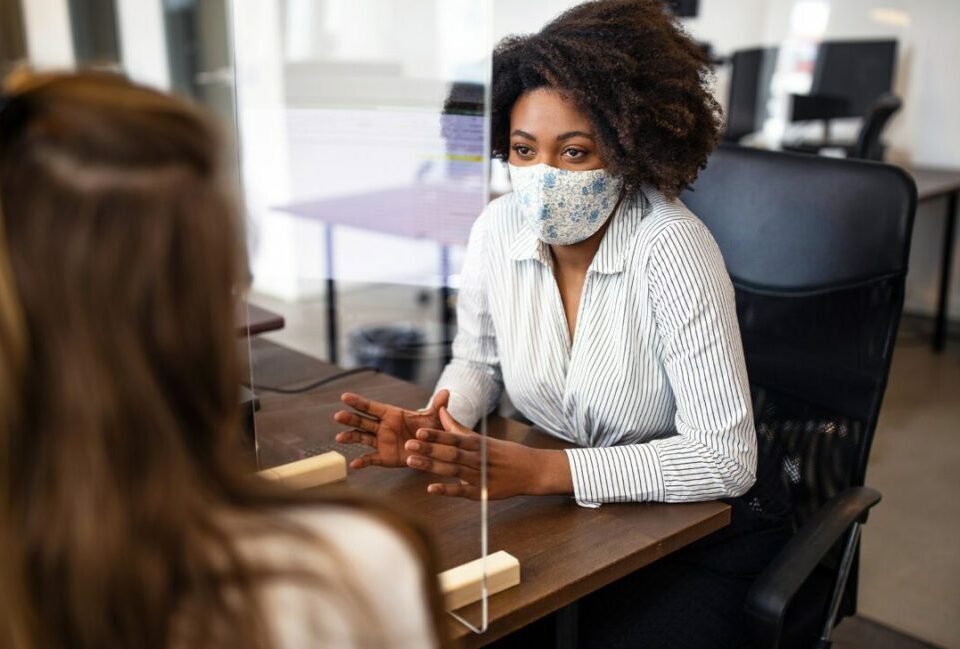