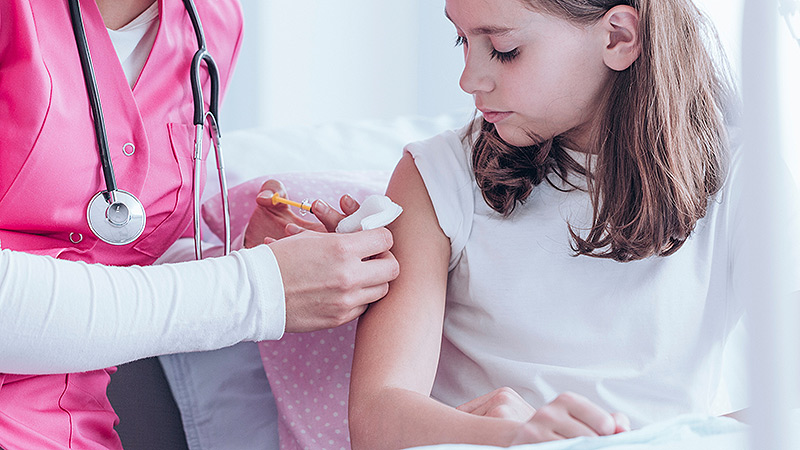 Rates of human papillomavirus vaccination increased for both boys and girls in the United States over the past decade, but remain below target levels and vary widely across states based on data from a nested cohort study including more than 7 million children.

To identify trends in one-dose and two-dose human papillomavirus (HPV) vaccination coverage, the researchers reviewed data from the MarketScan health care database between January 2003 and December 2017 that included 7,837,480 children and 19,843,737 person-years. The children were followed starting at age 9, when HPV vaccination could begin, and ending at one of the following: the first or second vaccination, insurance disenrollment, December 2017, or the end of the year in which they turned 17.

Cumulative HPV vaccinations seen among children continuously enrolled in the study were similar to the primary analysis, the Chen and associates said. “After the initial HPV vaccination, 87% of girls and 82% of boys received a second dose by age 17 in the most recent cohorts.”

“Thus, measures beyond recommending routine vaccination at annual check-ups might be necessary to attain sufficient HPV vaccine coverage, and the optimal strategy may differ by state characteristics,” they wrote.

The study findings were limited by several factors including the use of data from only commercially-insured children and lack of data on vaccines received outside of insurance, the researchers noted.

However, the results were strengthened by the large, population-based sample, and support the need for increased efforts in HPV vaccination. “Most states will not achieve the Healthy People 2020 goal of 80% coverage with at least two HPV vaccine doses by 2020,” Chen and associates concluded.

Vaccination Goals Are Possible With Effort in the Right Places

The fact of below-target vaccination for HPV in the United States may be old news, but the current study offers new insights on HPV uptake, Amanda F. Dempsey, MD, PhD, of the University of Colorado at Denver, in Aurora, wrote in an accompanying editorial.

“A unique feature of this study is the ability of its researchers to study individuals over time, particularly at a national scope,” which yielded two key messages, she said.

In addition, the study design allowed the researchers to model future vaccine coverage based on current trends, said Dempsey. “The authors estimate that, by the year 2022, the 2012 birth cohort will have reached 80% coverage for the first dose in the HPV vaccine series.”

Dempsey said she was surprised that the models did not support the hypothesis that school mandates for vaccination would increase coverage; however, there were few states in this category.

Although the findings were limited by the lack of data on uninsured children and those insured by Medicaid, the state-by-state results show that the achievement of national vaccination goals is possible, Dempsey said. In addition, the findings “warrant close consideration by policy makers and the medical community at large regarding vaccination policies and workforce,” she emphasized.The study received no outside funding. Chen had no financial conflicts to disclose. Several coauthors reported research grants to their institutions from pharmaceutical companies or being consultants to such companies. Dempsey disclosed serving on the advisory boards for Merck, Pfizer, and Sanofi Pasteur.