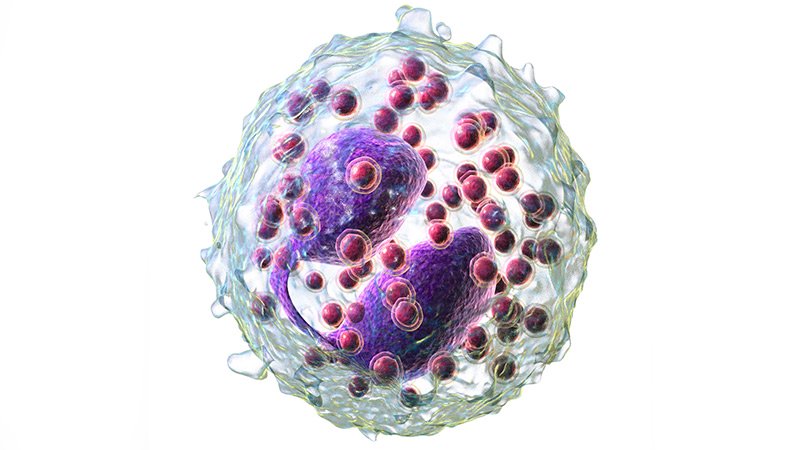 The rate of severe asthma exacerbation was significantly reduced after 36 weeks of treatment with oral masitinib in a phase 3 randomized, placebo-controlled trial.

At a dose of 6 mg/kg daily, masitinib, a tyrosine kinase inhibitor, was effective in patients with severe, persistent asthma not controlled with high-dose inhaled corticosteroids, long-acting beta agonists (LABAs), or oral corticosteroids, regardless of baseline eosinophil levels.

“Overall, the safety was equivalent between the two arms — placebo and masitinib — and there was no difference in serious adverse events,” said Pascal Chanez, MD, PhD, from the University of Aix-Marseille in France, who presented the study results at the virtual European Respiratory Society International Congress 2020 (ERS2020).

No new safety concerns were evident during the 36-week trial, Chanez reported, adding that the team might conduct a blinded extension study out to week 96.

Masitinib is different from current treatments in that those generally are targeted toward patients with higher levels of blood eosinophils, said Michael Blaiss, MD, executive medical director of the American College of Allergy, Asthma and Immunology, in an interview with Medscape Medical News. Blaiss was not involved in the study.

The new drug has the advantage of being effective for people with high and low eosinophil counts, and is taken orally, not injected, he explained.

The field welcomes an effective treatment for this population, which has high rates of emergency department use and hospitalizations, he noted. And because flare-ups can’t be controlled with inhaled corticosteroids or LABAs, quality of life is diminished for these patients.

Only 3% to 10% of adults living with asthma have severe disease. However, an estimated 60% of all asthma-care costs go to treating this small subset of patients, a 2017 review reports, primarily because of medication costs.

“We don’t have the agents out there that are efficacious for what we would call type 1 severe asthma,” Blaiss said.

“The treatments we’ve had for that, up until now, are the LAMAs — long-acting muscarinic antagonists — oral corticosteroids daily or every other day, and a surgical procedure: bronchial thermoplasty. So we don’t really have an effective oral agent for these patients with the low eosinophils.”

Although masitinib appears generally safe, “the concern with all of these agents is the safety long-term. I’m not sure 36 weeks really tells us a lot,” he said.

And Blaiss pointed out that for patients with elevated eosinophils, it’s unknown whether masitinib is really better than any of the other biologics.

These medicines aren’t cures; rather, they are treatments intended for chronic use, which is why the long-term safety data are so important, he noted.

Masitinib “has a completely different mechanism of action than anything else we’ve ever used for asthma,” said Blaiss, explaining that it works on mast cells and other cells related to inflammation.

It is exciting to have a potential new treatment because of the lack of treatment options for noneosinophilic asthma, said Celeste Michala Porsbjerg, MD, from the Department of Clinical Medicine at the University of Copenhagen in Denmark, during a panel discussion at ERS2020.

“Even in eosinophilic asthma, the existing biologic treatments will reduce exacerbation rates by around 50% to 60%, which means there is still an unmet need for more and better treatment options,” she said.

“I will be looking forward to seeing more data from this study to understand whether we can identify more about which patients are going to respond,” Porsbjerg said.