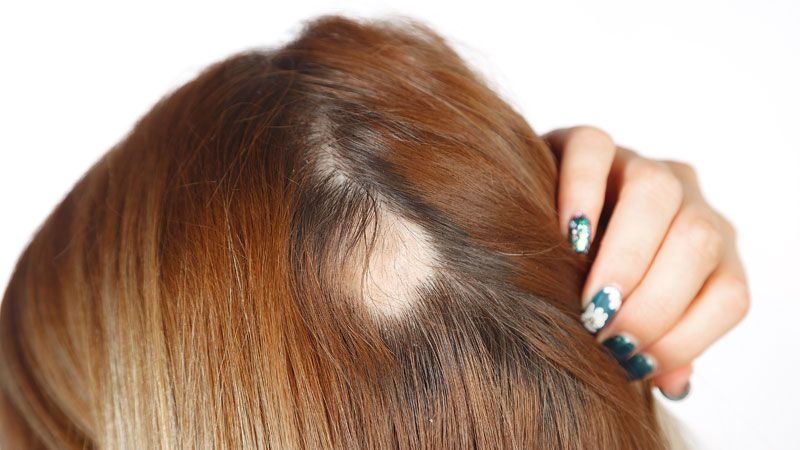 For patients with central centrifugal cicatricial alopecia (CCCA), several therapies showing benefit in case studies might reasonably be considered for those who have failed standard interventions, according to a review of current strategies for this challenging disease, delivered at the virtual Skin of Color Update 2020.

Two case reports of favorable results with topical metformin were published earlier this year. A subsequent case in which metformin provided a major improvement in quality of life has provided further encouragement, according to Crystal Aguh, MD, director of the ethnic skin program at Johns Hopkins University, Baltimore.

In the subsequent case, there was complete scalp coverage, allowing the patient to no longer use a wig, which is “tough to achieve in patients with advanced disease,” Dr. Aguh said.

This finding is potentially important. Most current treatments for CCCA are based on anti-inflammatory activity, according to Dr. Aguh, but fibrosis is strongly implicated in the pathogenesis of CCCA. Of several lines of evidence, one is the association between CCCA and other fibrosing conditions.

For example, women with CCCA “are several times more likely to have uterine fibroids than women without CCCA,” said Dr. Aguh, citing a study that she published in 2018. She suggested that there is an urgent need for new treatment options because of the “often-disappointing” responses to current standard therapies.

In the CCCA cases treated so far, topical metformin has been well tolerated, which is attributed to the low level of systemic absorption. No nausea or other gastrointestinal side effects common to oral metformin have been so far observed in Dr. Aguh’s cases.

“Some patients experience scalp dryness or irritation,” she said, but added that a light coating of emollient typically relieves this complaint.

Despite the promising results, topical metformin “is not a silver bullet,” Dr. Aguh cautioned. She estimated that only 10%-15% of patients respond, but this treatment can be considered “as an adjunctive option to avoid another round of intralesional steroids.”

Platelet-rich plasma (PRP) is another option that has demonstrated promise in a published case report for which Dr. Aguh served as a coauthor. In this series of two patients, only one had CCCA. The other had lichen planopilaris, but both patients experienced hair regrowth after failing standard therapies.

When treating alopecia with PRP, Dr. Aguh typically offers three or four sessions spaced 4 weeks apart. She does not start other treatments at the same time, but she does not discontinue topical treatments that patients are already taking, including topical minoxidil.

Again, like topical metformin, PRP is reasonably considered in patients who have failed standard therapies, according to Dr. Aguh. She cautioned that responses are not permanent. Patients who respond typically require retreatment a year or more later, but good responses have been seen after retreatment.

Appropriate hair care can help. Dr. Aguh recounted a case in which a patient with presumed CCCA was referred after failing intralesional triamcinolone injections. Ultimately, the patient was diagnosed with acquired trichorrhexis nodosa, but the large clinical improvements gained from better hair care practices, including avoidance of chemical relaxants and thermal styling, are relevant to CCCA, as well as other conditions resulting in hair loss.

In a book written by Dr. Aguh, titled “90 Days to Beautiful Hair,” strategies for better hair care practices include advice to reduce tension on hair follicles.

The role of increased traction is an issue in CCCA, agreed Amy McMichael, MD, chair of the department of dermatology, Wake Forest University, Winston-Salem, N.C. Although she provided data at the meeting suggesting that CCCA is a fibrosing disease linked to genetic susceptibility, she said there is also a “strong association” between the severity of CCCA and extensions, hair weaving, and other tension-associated hairstyles.

While there is an urgent need to develop therapies that address the underlying pathophysiology of CCCA, she concurred that patients with this or other conditions associated with hair loss, such as seborrheic dermatitis or frontal fibrosing alopecia, should not ignore appropriate hair care.