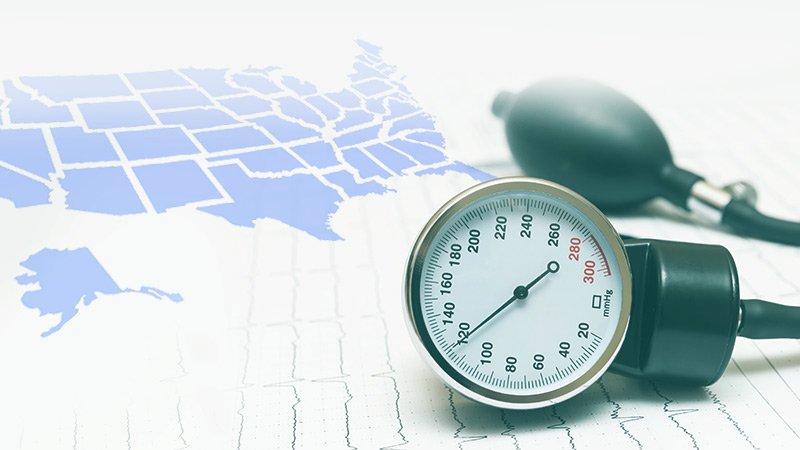 After years of improvement, the number of Americans whose blood pressure (BP) is under control is declining, suggest two new analyses of data from the National Health and Nutrition Examination Survey (NHANES).

People who had visited a healthcare provider within the past year were six times as likely to have controlled BP compared to those who had not.

“What we found was startling and concerning,” lead author Paul Muntner, PhD, professor of epidemiology and associate dean for research, School of Public Health, University of Alabama at Birmingham, told Medscape Medical News.

This study was published online September 9 in JAMA.

In 2014, the eighth Joint National Committee hypertension guideline (JNC8) raised the BP goal to <150/90 mmHg for adults aged ≥60 years who did not have diabetes; but in 2017, the American College of Cardiology and American Heart Association (AHA/ACC) released a guideline that lowered the BP target to <130/90 mmHg for all adults.

“Thus, declining control was not fully explained by BP targets for adults ≥60 years and subsequent controversy,” they state.

In a separate report by Muntner and colleagues that was published in JAMA, researchers analyzed cross-sectional NHANES data beginning in 1999–2000 and ending in 2017–2018.

In particular, they analyzed data on 18,262 participants (aged ≥18 years) who had hypertension (defined as BP ≥140/90 mmHg or use of antihypertensive medication) from among the total number of participants included in the NHANES analysis (N = 51,761 participants; mean age, 48 years; 50.1% female).

There was a dramatic difference in BP control between people who had a usual healthcare facility compared to those who did not (48.4% vs 26.5%) and between those who had vs those who had not visited a healthcare provider in the past year (49.1% vs 8.0%).

“This is a little worrisome, and our findings reinforce the message that it is important to go to the doctor and get BP checked, and if it is high, the patient can be started on medication or can have the dose adjusted,” Muntner commented.

In 2017–2018, awareness of having hypertension was greater among non-Hispanic Black participants compared to non-Hispanic White, Asian, and Hispanic participants, but rates of BP control were lower.

“There have been good public health campaigns to raise awareness of hypertension among African Americans, and they are equally likely to be treated, but rates of BP control are a little lower,” Muntner observed.

“I think it comes down to making sure everyone has access [to care], reducing disparities, having pharmacies or mail order pharmacies where everyone can get the right medications that are effective in lowering BP,” he added.

Commenting on both studies for Medscape Medical News, Robert M. Carey, MD, professor of medicine, University of Virginia, Charlottesville, Virginia, said, “Unfortunately, the recent increase in adults with BP out of control likely reflects the 2014 recommendation to relax control. In 2017, however, the importance of tight blood pressure control was reaffirmed and the goal blood pressure reduced by the 2017 ACC/AHA clinical practice guideline.”

Carey was co-chair of the writing committee for the 2017 ACC/AHA guideline and was not involved in either study. He noted that the findings do not “reflect changes in blood pressure control after the 2017 guideline was published and disseminated to the clinical practice community, and we can anticipate improvement in control as a result of the recommendations in this guideline.”

Paul Whelton, MB, MD, Show Chwan Chair in Global Public Health, Department of Epidemiology Tulane University School of Public Health and Tropical Medicine Tulane University of Medicine, New Orleans, Louisiana, agreed. In recommending higher levels of BP control, he said, the JNC8 report perhaps “put some confusion out there that may have said to people, ‘You can back off, you don’t have to be so strict’ ” with BP control, he told Medscape Medical News.

Whelton was chair of the writing committee of the 2017 ACC/AHA guideline and was not involved in either study. He emphasized that lifestyle improvement “should always be the core management strategy for prevention and treatment of high blood pressure, to which drugs should be added in certain settings.”

In an editorial that accompanied the report in JAMA, Gregory Curfman, MD, and colleagues suggest that it “will be crucial to repeat the analyses of Muntner et al in another 5 years to determine whether progress has been achieved, with direction provided by the 2017 US and 2018 European guidelines.”

A second editorial in JAMA, written by Griffin Rodgers, MD, and Gary Gibbons, MD, of the National Institutes of Health, noted that non-Hispanic Black adults had poorer BP control than non-Hispanic White adults.

“If the US is committed to changing the trend line of health disparities in obesity and hypertension, it is critical to acknowledge the important contributions of systemic racism and the social determinants of health in the context of the current COVID-19 crisis,” they write.

In a statement jointly issued by the American Medical Association (AMA) and the AHA, Susan R. Bailey, MD, president of the AMA, and Mitchell S. V. Elkind, MD, president of the AHA, said that the study by Muntner and colleagues “reinforces the need for all healthcare providers and their patients to prioritize blood pressure control, especially now, as cardiovascular disease places people at greater risk for adverse outcomes associated with COVID-19.”

The AMA has developed a framework for improving BP control and provides online resources to make it easier for clinicians to access the latest evidence-based guidance for the management of patients with hypertension. It is part of the AMA’s and the AHA’s joint Target: BP initiative.

In addition, the AMA and AHA teamed up with a group of national healthcare organizations and ESSENCE on the Release the Pressure campaign to advocate for improved heart health among Black women.

The study authors have received support from the National Heart, Lung, and Blood Institute. Muntner has received grant funding and consulting fees from Amgen, Inc. The original article lists the other authors’ relevant financial relationships. Carey, Whelton, Curfman and coauthors, Rogers, and Gibbons have disclosed no such financial relationships.