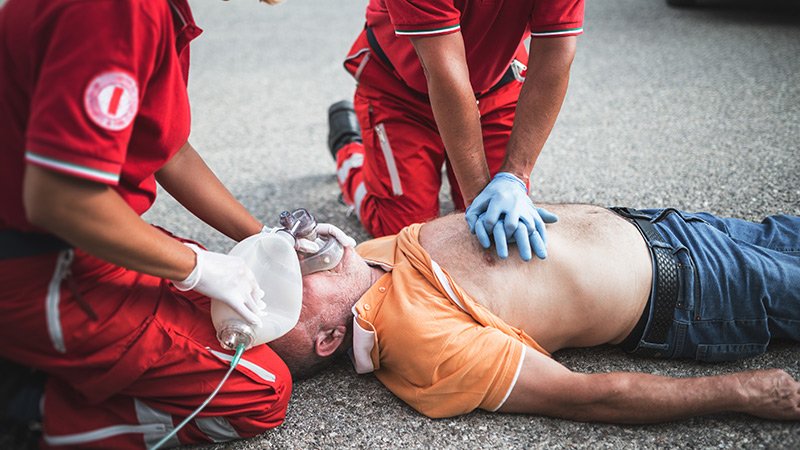 The odds of surviving out-of-hospital cardiac arrest (OHCA) are significantly better when resuscitation efforts are continued on scene, as opposed to being performed while the patient is being transported to the hospital, a large observational study has found.

The process of moving a patient during resuscitation (known as “scoop and run”) may impair or delay best practices, including impairing the quality of cardiopulmonary resuscitation (CPR), say investigators with the Resuscitation Outcomes Consortium (ROC).

“Although infrequently there may be individual cases with a specific rationale to pursue hospital transport, overall, these results support a strategy that paramedics dedicate effort and expertise at the scene of the cardiac arrest, rather than prioritizing transport to hospital,” first author Brian Grunau, MD, St. Paul’s Hospital, Vancouver, British Columbia, Canada, told theheart.org | Medscape Cardiology.

Jeffrey M. Goodloe, MD, member of the board of directors of the American College of Emergency Physicians and chief medical officer, Medical Control Board, EMS System for Metropolitan Oklahoma City and Tulsa, agrees.

“This study supports and validates what most large urban EMS systems in the US are doing, which is actively resuscitating on scene for a minimum of 20 minutes,” he told theheart.org | Medscape Cardiology.

“This is absolutely in line with what we have been doing here in metropolitan Oklahoma City and Tulsa for a number of years,” said Goodloe, who was not involved in the study.

The study was published online September 15 in JAMA.

The findings are based on data from the ROC Cardiac Epidemiologic Registry, which involves 10 study sites and 192 EMS agencies in the United States and Canada.

Among the full cohort of 43,969 adult EMS-treated OHCA patients (median age, 67 years; 37% women), 26% underwent intra-arrest transport. The rate of survival to hospital discharge was 3.8% among these patients, vs 12.6% among those who received on-scene resuscitation.

In a propensity-matched cohort of 27,705 OHCA patients, the probability of survival to hospital discharge was statistically significantly lower with intra-arrest transport than with continued on-scene resuscitation (4.0% vs 8.5%), an absolute difference of 4.6%, with an adjusted risk ratio (RR) of 0.48 (95% CI, 0.43 – 0.54).

Transport during resuscitation was also associated with lower probability of survival to hospital discharge with favorable neurologic outcome (modified Rankin scale, <3; 2.9% vs 7.1%), an absolute difference of 4.2%, with an adjusted RR of 0.60 (95% CI, 0.47 – 0.76).

The findings remained significant in favor of on-scene resuscitation in the subgroups of patients with initial shockable and nonshockable rhythms, as well as with EMS-witnessed and unwitnessed cardiac arrests.

“We attempted to find subgroups of patients for whom intra-arrest transport may be associated with improved outcomes. However, the results for nearly all subgroups tested were consistent with our primary analysis,” Grunau told theheart.org | Medscape Cardiology.

“We did find, however, that for patients who remained in refractory arrest past 30 minutes and were still undergoing active resuscitation, that intra-arrest transport was associated with improved outcomes,” he said.

The caveat to this, however, is that most of the survivors who were transported during resuscitation were successfully resuscitated before they arrived at the hospital, “raising questions about the hospital-based contributions to intra-arrest transport survivors,” the authors note in their article.

Goodloe is not surprised by the benefit of continuing resuscitation effort at the scene.

“What we have seen in Oklahoma City and Tulsa is that, in the times that we do transport individuals to hospital, it becomes a significant challenge for the EMTs and paramedics that are continuing to provide care in transit to sustain the same quality of CPR,” he noted.

In a JAMA editorial, Alexander X. Lo, MD, PhD, Department of Emergency Medicine, Northwestern University Feinberg School of Medicine, Chicago, Illinois, says the findings suggest “a strong clinical benefit associated with continuing the resuscitation on scene until a definitive outcome has been achieved.”

But Lo argues, “Before embracing this model, and substantially changing the out-of-hospital approach to OHCA, more definitive studies, including high-quality randomized trials, will be needed.”

Lo says two contemporary issues lend greater importance to the need to advance the science on OHCA. One is the aging of the US population, which will likely increase the incidence of OHCA and the need for optimal OHCA care.

The other is COVID-19, which has added further risks to the management of OHCA, given that the infection status of patients may be unclear in many cases. CPR and intubation are aerosol-generating procedures and further increase the risk for infection for EMS and hospital workers.

“If continued on-scene resuscitation confers a true benefit in outcome for OHCA, then it must also be accompanied by the necessary policy and logistical considerations to ensure that all EMS personnel have the necessary personal protective equipment to minimize their risk of COVID-19 infection,” Lo cautions.

Goodloe thinks this is a “thought-provoking study, not only within EMS and the larger medical community but even more so as we help communities better understand the advanced capabilities that EMS systems have today.

“We often equate rushing to the hospital with it being a good thing. God forbid, if somebody in my family has a sudden cardiac arrest, with a significant on-scene-time committed resuscitation, I’m going to feel a lot better about the outcome, and if that family member dies, I can at least be at peace that they got optimal care if you show me that EMS was on scene for 20-plus minutes as opposed to a handful of minutes,” Goodloe commented.

The Resuscitation Outcomes Consortium is supported by the National Heart, Lung, and Blood Institute in partnership with the National Institute of Neurological Disorders and Stroke, the US Army Medical Research and Material Command, the Canadian Institutes of Health Research – Institute of Circulatory and Respiratory Health, Defence Research and Development Canada, the Heart and Stroke Foundation of Canada, and the American Heart Association. Grunau is the principal investigator of a clinical trial investigating the benefit of intra-arrest transport to hospital for extracorporeal CPR initiation and has received speaking honorarium from Stryker Corp. Lo and Goodloe have disclosed no relevant financial relationships.