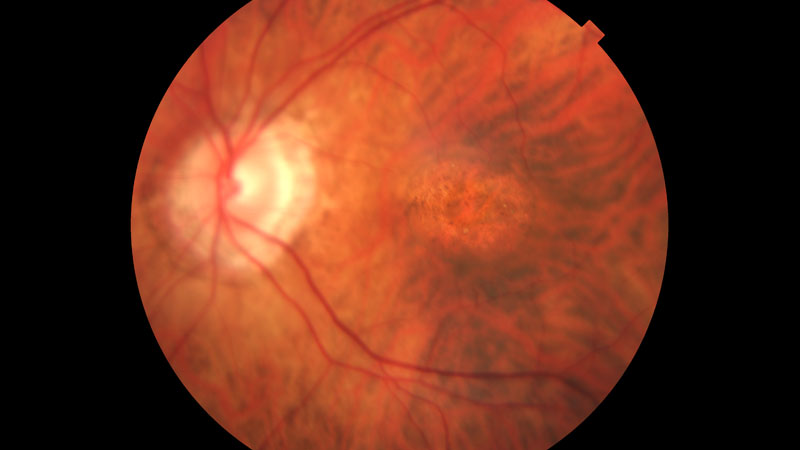 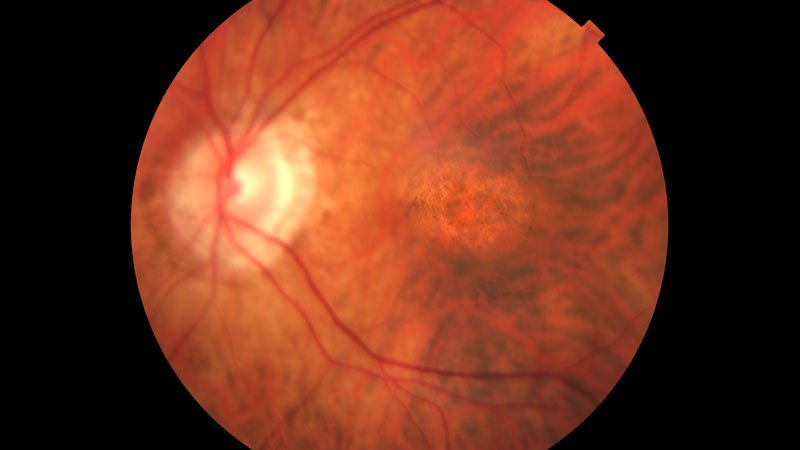 Growth in the series of lesions slowed by an average of 47% after being zapped with low doses of the laser, said Jeffrey Luttrull, MD, from Ventura County Retina Vitreous Medical Group in California.

The treatment, if validated in randomized clinical trials, could be the first effective therapy for one of the leading causes of blindness.

Several drugs are under investigation for the condition. Avacincaptad pegol (Zimura) slowed the growth of lesions by 28% over 18 months in a phase 3 trial. Although the investigators could not detect statistically significant benefits in visual acuity with the drug, the hope is that these will show up over a longer period of time. They did not attribute any adverse events to the treatment.

Clinicians have long used lasers to treat dry age-related macular degeneration, the condition underlying geographic atrophy. Early treatments focused on destroying drusen, the hallmark of the disease, but the laser damaged the retina, resulting in choroidal neovascularization and vision loss.

Although short-pulsed, microsecond and nanosecond continuous waves do not appear to increase choroidal neovascularization, they accelerate macular degeneration rather than slowing it, Luttrull and his colleagues say in their report, published in Clinical Ophthalmology to coincide with the virtual presentation at the European Society of Retina Specialists (EURETINA) 2020.

These therapies might not be lethal to the retinal pigment epithelium, but they are “inherently photodisruptive” to it, stressing already an already damaged system, Luttrull explained.

In contrast, rather than damaging living cells, subthreshold diode micropulse laser stimulates them. The treatment “affects the kinetics of retinal heat-shock proteins, accelerating the rate of protein repair only in dysfunctional cells. Normal cells are unaffected,” he said, adding that in vitro and animal studies have revealed a wide range of beneficial effects.

“I think this is going to be the most highly effective solution for geographic atrophy, and certainly the safest, and I think it can actually be improved on,” he told Medscape Medical News.

I think this is going to be the most highly effective solution for geographic atrophy, and certainly the safest.

In their study, Luttrull and his colleagues assessed the progression of geographic atrophy lesions in 67 eyes from 49 patients before and after treatment with subthreshold diode micropulse laser.

He repeated the treatment every 3 to 4 months, with an average interval of 112 days. Over a follow-up period that ranged from 121 to 1489 days, the number of treatments per eye ranged from three to 13.

Linear radial growth of the lesions dropped from 137 µm per year before the treatment to 73 µm after the treatment, which is a 47% reduction in velocity (P < .0001). Average visual acuity in the study participants, which ranged from 20/20 to 20/1000, decreased over time; the researchers did not see any change in the rate of decrease after treatment.

The change in the speed of progression was not significantly different between the 19 lesions smaller than 1000 μm in diameter and the 48 lesions larger than 1000 μm.

However, a significant difference in the benefits of treatment might be seen between small and large lesions in a larger sample, and more frequent treatments might produce a bigger effect, Luttrull theorized.

There were no adverse reactions to the treatment.

This study “provides, potentially, some evidence that there is an association between a laser procedure and a slowing in the progression of geographic atrophy,” said Ajay Kuriyan, MD, from Wills Eye Hospital and Thomas Jefferson University in Philadelphia.

But a comparison of disease progression in the same eyes before and after treatment is not adequate to determine whether the procedure really works. “You would need a larger randomized controlled study to make conclusions about the role of subthreshold laser in geographic atrophy,” he told Medscape Medical News.

And to justify a more rigorous trial, other investigators will have to repeat the results documented by Luttrull’s team, Kuriyan added.

Because of the way lesions were measured in this study, effect sizes cannot be compared with those seen in other studies of drugs for geographic atrophy, he explained.

Luttrull invited other investigators to try the treatment for themselves.

He has previously been involved in studies that suggest that subthreshold diode micropulse laser can reverse tolerance to antivascular endothelia growth-factor drugs, prevent choroidal neovascularization in patients at high-risk for age-related macular degeneration, prevent genetic retinal diseases, and prevent retinitis pigmentosa and a variety of other eye ailments.